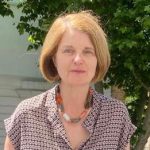 Susan Dabney Pennybacker’s research centers upon the political culture of modern Britain and the former British Empire. Her book-in-progress, entitled Fire By Night, Cloud by Day: refuge and exile in postwar London (Cambridge), concerns the movement of individuals between South Africa, Trinidad, India, and metropolitan London between 1945 and 1994. It is based in both archival and ethnographic research conducted in London, New Delhi, Port of Spain, Cape Town, and Johannesburg. She has a keen interest in visual media sources, especially in documentary photography and film. Pennybacker is a founding member and co-convener of the Triangle Global British History Seminar and the Transnational and Global Modern History seminar; she is a member of the convening board of the Triangle Intellectual History Seminar. Pennybacker serves as an associate editor of the Journal of British Studies; a member of the editorial board of the series, Critical Connected Histories (Leiden University Press); and, an advisory board member of the American Friends of the Institute for Historical Research (University of London).