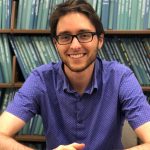 My dissertation, “The Regime Change Consensus: Iraq in American Politics 1990-2003”, looks at the containment of Iraq in the 1990’s through the broader lenses of American politics and debates about America’s role in the post-Cold War world. I argue that over the course of this decade, containment came under heavy criticism from multiple sources, making it a highly discredited policy by the end of the decade. I examine the beliefs formed about Iraq and containment in this period that carried over into post 9/11 policy making. These include the idea that the U.S. could never negotiate with Saddam Hussein, the belief that the international coalition behind sanctions and inspections could not be restored, and the consensus that the only way to solve the Iraq problem was regime change. The discrediting of containment in the 1990’s is vital for understanding why the Bush administration embraced a regime change through invasion strategy after 9/11 and why this policy received so much support across the political spectrum.