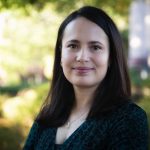 Ana María Silva Campo is a historian of race, gender, religion, and the law in colonial Latin American cities. Her book manuscript, Travelers of the Half Moon Gate, studies the formation of religious, gendered, and increasingly racialized hierarchies in Cartagena de Indias, the main port for the trade in African captives in Spanish South America during the seventeenth century. It examines the tension between the political economy of the trade in African captives and Spain’s imperial project to enforce religious orthodoxy. Using the rarely studied financial archives of the tribunal of the Inquisition in Cartagena, Travelers of the Half Moon Gate shows how the Inquisition transformed the city by confiscating and reselling the houses of free women of African descent while preserving the networks that sustained the trade in African captives during the seventeenth century.
[Dr. Silva Campo will be on leave 2022-2023.]

“Through the Gate of the Media Luna: Slavery and the Geographies of Legal Status in Colonial Cartagena de Indias,” in The Hispanic American Historical Review 100: 3 (August 2020): 391-421.