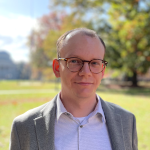 My research interests include the social and cultural history of Jews in East Central Europe, the Jewish immigrant experience in the United States, and Yiddish culture. I am particularly interested in questions of belonging and place in the modern era, memory, and transnationalism. My dissertation looks at Jewish immigrants from the Habsburg province of Galicia in New York's Lower East Side from the 1890s to 1930s. Specifically, it traces the concept of the "Galitsyaner" within the larger immigrant community, its social organizations and in Yiddish popular culture.