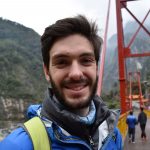 I study spatial cosmologies in pre-Columbian and colonial Tehuantepec, Mexico. I am interested in borders, networks of exchange, land use, and religious conceptions of landscape between indigenous and Hispanic cultures.