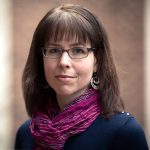 Molly Worthen’s research focuses on North American religious and intellectual history. Her most recent book examines American evangelical intellectual life since 1945. Worthen teaches courses in global Christianity, North American religious and intellectual culture, and the history of politics and ideology. In 2017 she received the Manekin Family Award for Teaching Excellence in Honors Carolina. She writes regularly about religion, politics and higher education for the New York Times and has also contributed to Politico, the New Yorker, Slate, the American Prospect, Foreign Policy, and other publications. She has also created courses for Audible and the Teaching Company on the history of charismatic leadership as well as the history of global Christianity since the Reformation. Worthen is currently working on a book about the history of charisma in America since 1600.