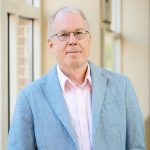 Professor Leloudis’ research and teaching focus on the social and political history of the modern South, with particular interests in labor, education, poverty, and voting rights. Together with Patricia Parker (Ruel W. Tyson Distinguished Professor and Director of the Institute for the Arts and Humanities), he co-chairs UNC’s Commission on History, Race, and A Way Forward. Professor Leloudis has also served as an expert witness in a number of recent voting rights cases tried in state and federal courts.