The Krasno Global Event Series is hosting it’s next “AMBASSADORS FORUM” – on October 6, 2022, at 2.00pm EST as a Zoom talk. This will be a conversation with the US Ambassador to the Republic of Moldova, KENT D. LOGSDON. Logsdon will be discussing Moldovan international security in a talk entitled:
“MOLDOVA: RUSSIA’S NEXT VICTIM?”
Below, you can see a brief description of Logsdon’s talk and find links to the Zoom and the Krasno website. 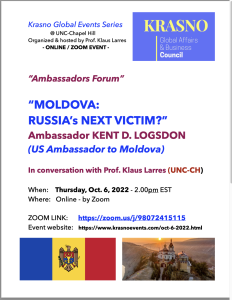 Talk Description:
The Republic of Moldova is a former Soviet republic and borders both Ukraine and Romania.  Russia occupies Moldova’s breakaway region of Transnistria.  Transnistria is not internationally recognized.  Russia views militarily neutral Moldova as part of its ‘sphere of influence.’  There has been much speculation that Moscow would like to ‘take over’ or even invade Moldova.
In June 2022 both Moldova and Ukraine received EU candidate status which sets both countries on the path to eventually becoming members of the European Union.  Moldova has close links to EU member Romania, with which it was united during the interwar period.
I had the great pleasure to visit Moldova including Transnistria in July and had a wonderful and most interesting time.
I greatly look forward to the conversation with Ambassador Kent Logsdon.  Mr. Logsdon has been US Ambassador to Moldova since February 2022.  Prior to this he was Deputy Ambassador and chargé d’affaires at the US embassy in Berlin.
The event will be held on Zoom only. The link is here or can be found on the Krasno website here.
+ Google Calendar+ Add to iCalendar