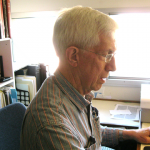 Professor McVaugh’s research focuses on the growth of medical and surgical learning in the Middle Ages, particularly as shaped by the thirteenth- and fourteenth-century universities, and on the concomitant medicalization of European life. Since 1975 he has been a general editor of the collected Latin writings of one of the most famous of medieval physicians, Arnau de Vilanova (d. 1311), a series now nearly complete. Most recently he has been engaged in a series of studies investigating aspects of the process of translation of medical literature in the Middle Ages: translations between Arabic and Latin, between Hebrew and Latin, and between Latin and the European vernaculars.