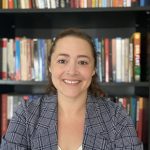 Raquel Escobar’s research focuses on 20th-century race, Indigeneity, and political and intellectual history in the Americas. As a postdoctoral fellow, Escobar is working on her book manuscript Indigenous Diplomacies which examines transnational Indigenous politics, diplomacy, and shifting twentieth-century racial scripts. Utilizing the Inter-American Indian Institute and the transnational political and intellectual networks that animated it, her work highlights how Indigenous people negotiated and utilized Inter-American state programs and examines the impact of US-sponsored institutions and research across the Americas. Her research documents transnational Indigenous political and intellectual networks that blossomed across the Americas during the twentieth century as the United States, Mexico, and other American nations sought to incorporate and transform Indigenous populations. In doing so, Escobar highlights Indigenous intellectuals, politicians, artists, and boarding school youth who demonstrate their continued ties and investment in community-specific notions of kinship, diplomacy, and autonomy across the hemisphere.

Theresa Rocha Beardall and Raquel Escobar, “What Then Remains of the Sovereignty of the Indians? The Significance of Social Closure and Ambivalence in Dollar General v. Mississippi Choctaw,” The Indigenous Peoples’ Journal of Law, Culture, and Resistance 3, no. 1 (2016): 3-38.