Roger Mudd earned his MA in History at the University of North Carolina in 1953.  Carlyle Sitterson was the advisor for his thesis on “The Press and the Brain Trust, 1932-1934.”  While at Carolina, Mudd also studied with Fletcher Green.

Mudd made generous gifts to the History Department, and in the Department’s 2005 Newsletter, he wrote with his characteristic humor: “I’ve finally retired after more than 50 years of teaching at Darlington School, Rome, Georgia, Princeton University and Washington & Lee University and reporting at The Richmond, Va. News Leader, WTOP-TV, Washington, D. C., CBS News, NBC News, the MacNeil-Lehrer Newshour and The History Channel. I’m now thumping away on a memoir and surprisingly have not forgotten how to footnote.”

Mudd made good use of his UNC training in history as a journalist for CBS, NBC, and PBS, as a host for documentaries on the History Channel, and a visiting professor at Princeton and his alma mater Washington and Lee.

A highlight of Mudd’s career as a journalist was his CBS interview with Senator Edward Kennedy on November 4, 1979, which effectively ended Kennedy’s presidential campaign.  His opening question, “Why do you want to be president?” surprised Kennedy, who struggled to find an answer, and the interview continued to unravel for the rest of the hour.

Mudd was married to Emma Jeanne (“E.J”) Spears, a sculptor and painter, as well as a talented poet and prose writer who published in the New York Times.  She raised four sons and was a fierce defender of her husband’s career as a journalist.

Roger and E.J. Mudd were close friends with Eudora Welty, who stayed at their home in McLean, Virginia, when she was in the Washington area.  With their characteristic sense of humor, the Mudds erected a sign outside their guest room that read “Eudora’s Room.”

The Mudds shared memorable visits with Welty at her home in Jackson, Mississippi.  Mudd loved to relate the story of a dinner that Welty hosted for them in her home with her old friend Charlotte Capers.  While the Mudds and Capers drank Maker’s Mark bourbon and ate sun-dried tomatoes on crackers in the living room, Welty prepared her crab casserole in the kitchen.  Suddenly, they heard a crash from the kitchen, and Roger asked Capers, “What was that?”

Capers replied, “That was dinner!”

Roger quickly walked to the kitchen and cleaned up the casserole and its broken Pyrex dish with a broom, mop, and dishpan.  Undaunted by the accident, they dined on Maker’s Mark, the remains of the appetizers, and lots of stories and laughter.

Two weeks after the Mudds returned home, they received a handwritten postcard from Welty with a smiling Cheshire cat on one side and on the other side a recipe for “Eudora’s Crab Dish” that read:

“Ingredients: Crabmeat, green pepper, onion, celery, mayonnaise, and spices.  Preparation: Remove from oven, immediately invert and allow to reach kitchen floor.  Test and see if thoroughly shattered.  If Roger Mudd is dinner guest, he will quickly appear and take care of everything.  Serves 0.”

Roger Mudd’s eloquent voice delivered public history and a deep appreciation of literary and cultural worlds into the homes and hearts of millions of Americans.  He was a beloved presence in our life, and a truly distinguished alumnus of Carolina’s History Department. 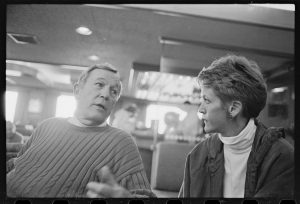 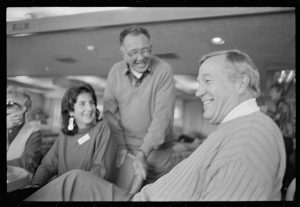